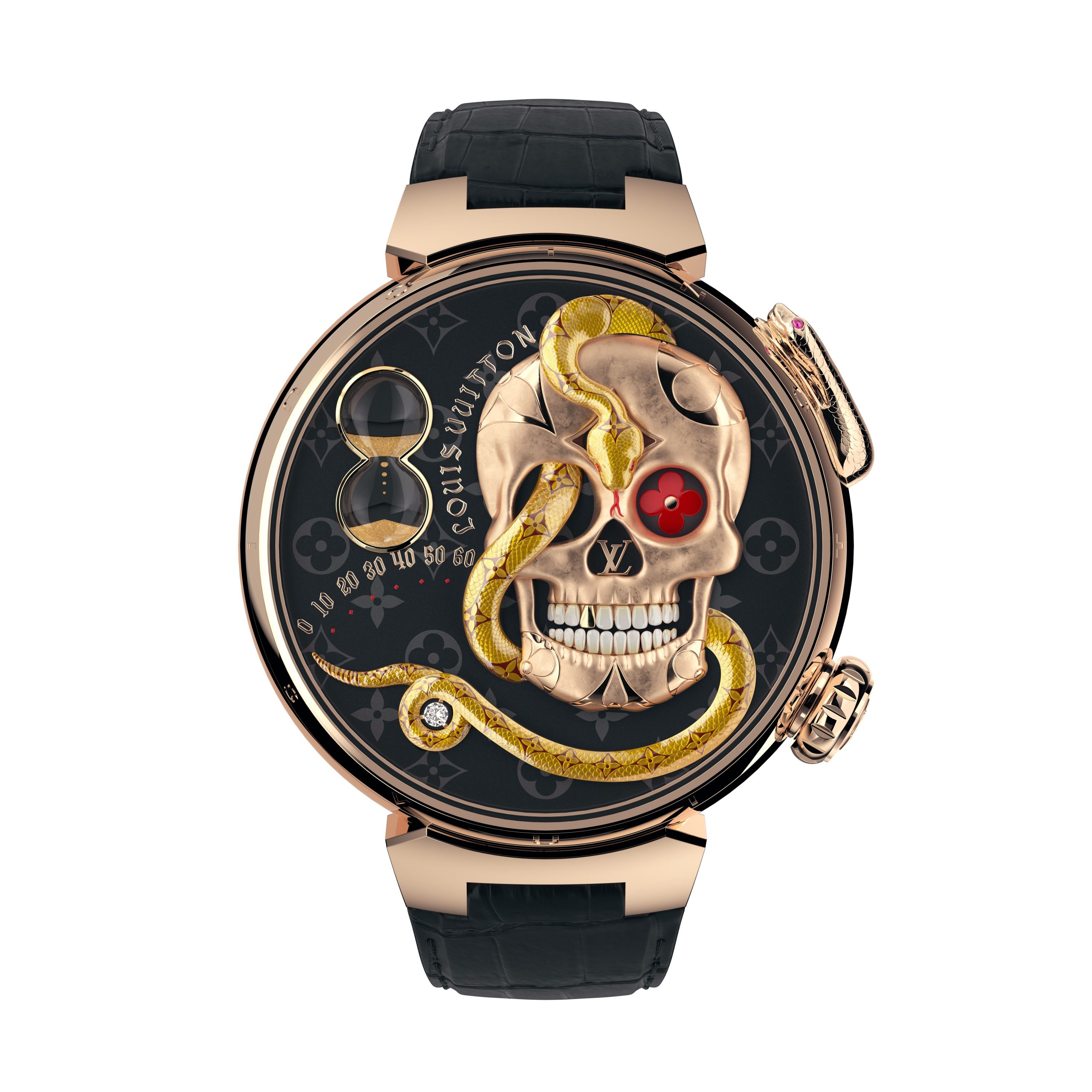 By combining exclusive high watchmaking caliber with a subversive vanitas, Louis Vuitton orchestrates a scintillating show with the Tambour Carpe Diem. This Virtuoso timepiece writes a new chapter in the history’ of the jacquemart watch.

Having produced several special orders for watches with automata in secret for a select group of clients, Louis Vuitton decided to lift the veil on the mystery by creating a one of a kind model. It took two years of development for the Tambour Carpe Diem to join the House’s watch collections. “Our aim was to get off he better track” explains Michel Navas, Master Watchmaker at La Fabrique du Temps Louis Vuitton. “We wanted to bring to the jacquemart our vision of the 21st century with all the energy and creativity characteristics of our brand since it began producing watches in 2002.” 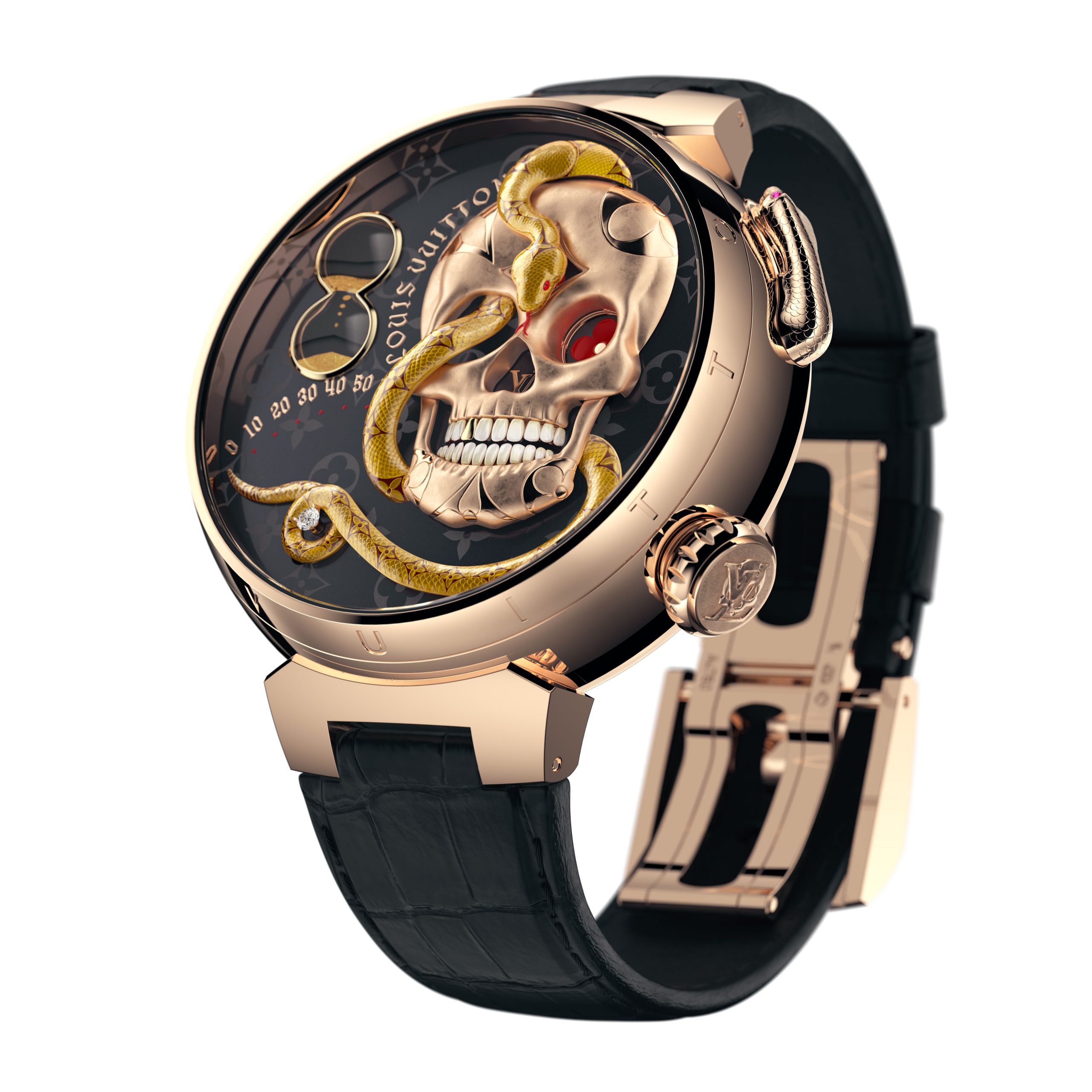 Originally, jacquemarts were automata created to strike the hours on church bell towers. When watchmakers miniaturised them on timepieces, their function became essentially decorative — to add a bit of fun to the dial — and the time continued to be indicated by classic hands.

Today Louis Vuitton wantecl to give jacquemarts back their original meaning. In order to do this, the framework of the Tambour Carpe Diem was built around two major axes, a perfect mastery of this type of calibre in which the automaton is truly functional as it tells the time on demand, without hands. By pressing a push-piece, the dial miniature scenery comes to life on the wrist and the story’s protagonists, the snake and the skull which perform the role of jacquemarts, indicates the time.

To this is added another determining feature in the creation of this high-watchmaking timepiece, a unique stylistic approach on the historic symbolic art theme of the Vanitas, tackled in a way that is both positive and subversive.

Watchmaking performance
Not content simply to allow the model to mark the passing of time, Louis Vuitton has provided additional watch complications. The Tambour Carpe Diem has four of these. A jumping hour, a retrograde minute, a power reserve display and the mechanism of the automate of which there are also four. “The prowess was to create a mechanical movement that is quite powerful to integrate and smoothly operate all these functions that had never been brought together before“, explains Michel Navas. 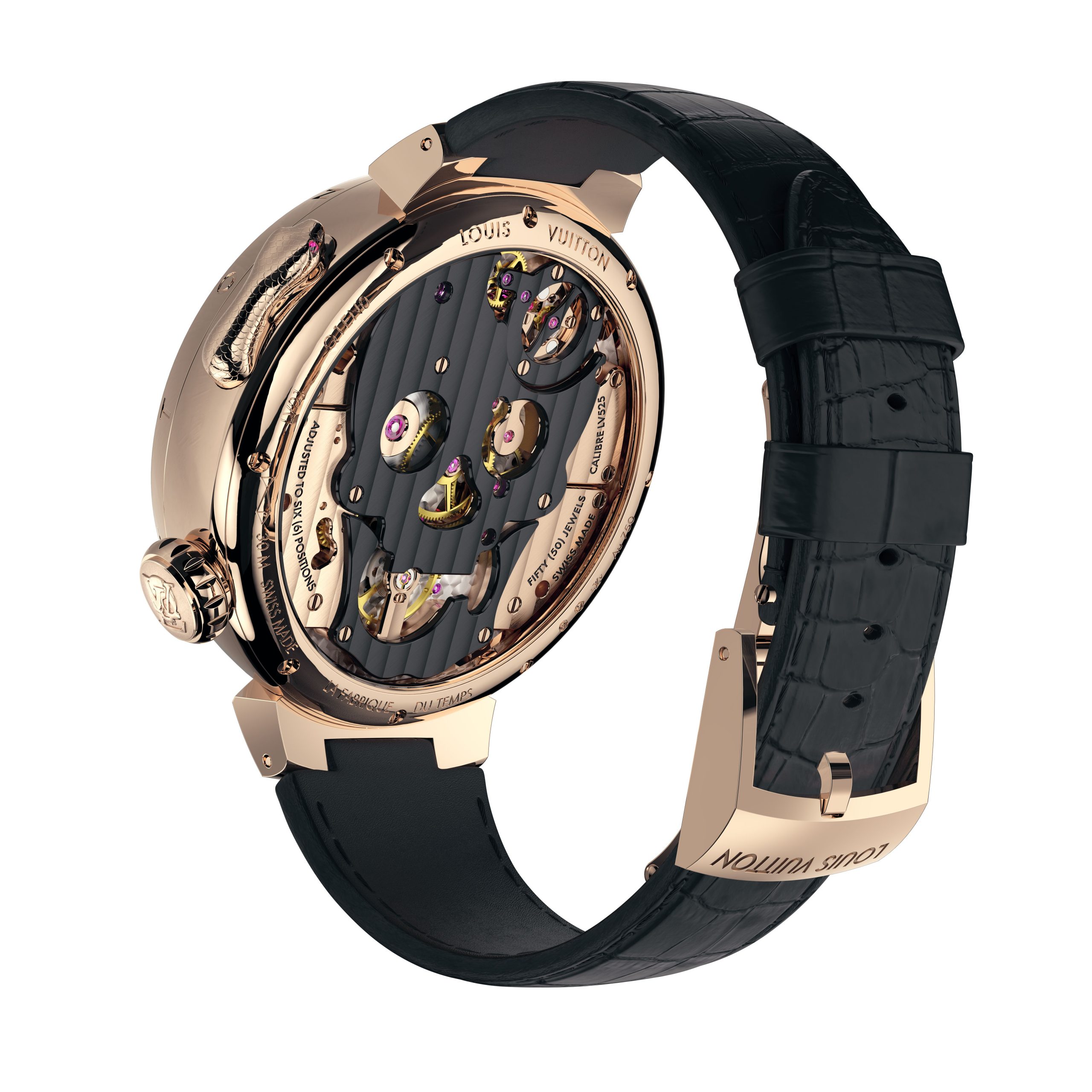 On the Tambour Carpe Diem, the time can be read on demand. To reveal it, simply push the reptile-shaped push-piece on the right of the case. The central snake’s head lifts up to reveal the hour aperture positioned on the forehead of the skull, while the rattlesnake tail oscillates towards the minutes, placed below the power reserve hourglass. While Monogram Flowers appear in lieu of an eye, the skulls  jaw emits a mocking laugh from which emerge the words “Carpe Diem” — “Seize the day”, in the words of the poet Horace, encouraging people to make the most of every passing day.

This amazing spectacle, which lasts for 16 seconds, is all the more remarkable as the reptile and skull move in such a bafflingly harmonious way. The readability of this unique complication watch is peerless. 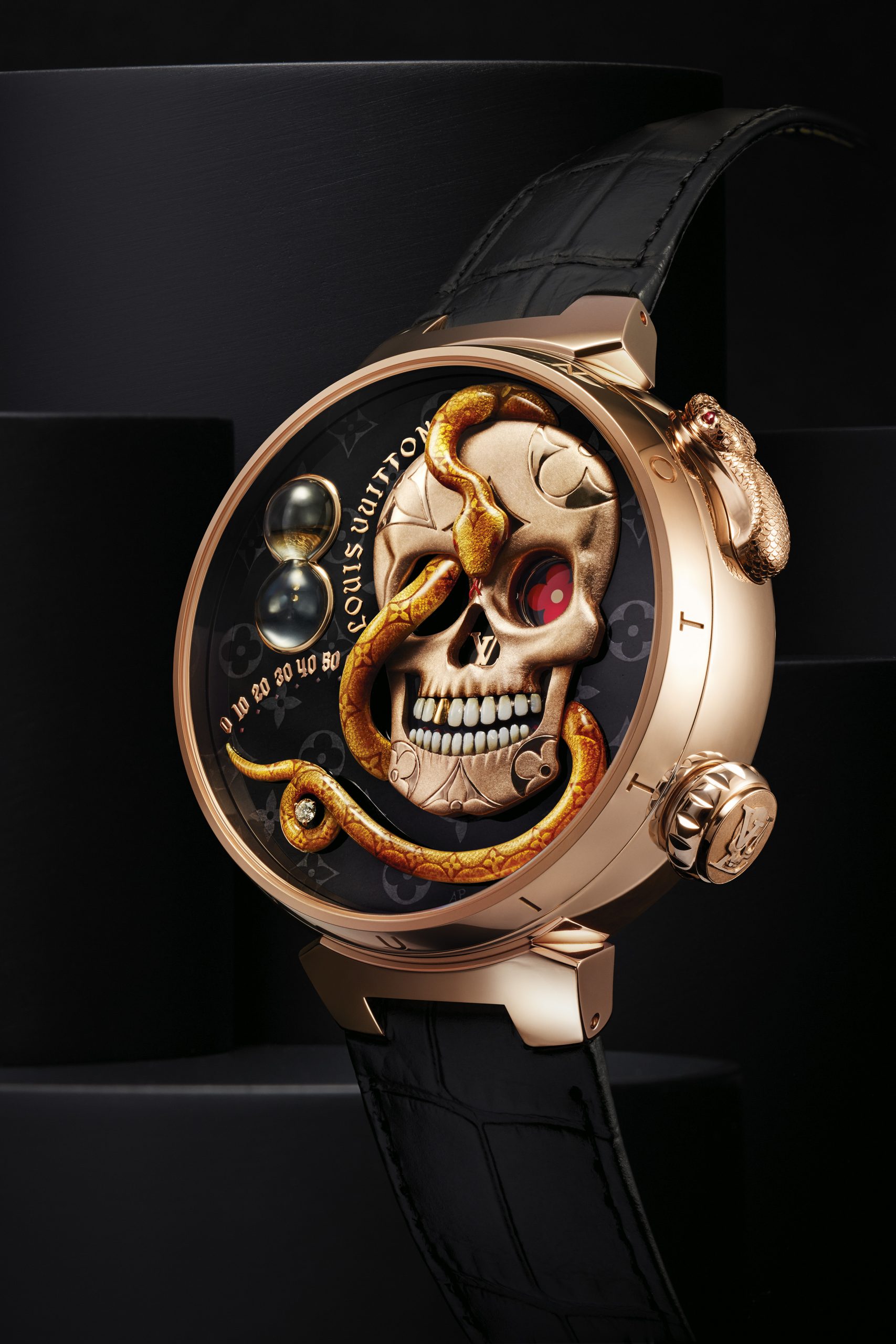 Another unique feature of the Tambour Carpe Diem is the design of its movement. Visible on the back of the timepiece, the calibre has been assembled in the shape of a skull, echoing the Vanitas on the dial.

An ultra-sophisticated contemporary aesthetic
Depicted since the 15th century on pocket watches and clocks, these skulls, skeletons and hourglasses are an allegory of the passing of time. In order to bring this Vanitas up-to-date, Louis Vuitton has modernised its attributes, entrusting its manufacture to the very best Swiss craftsmen such as Anita Porchet for the enamelling and Dick Steenman for the engraving. Over 50 hours’ work were dedicated to enamelling the snake and the dial. To bring to life the rattlesnake that appears in profile on the case’s push-piece, Dick Steenman crafted gold in a profiled, fluid manner in order to accentuate the crawling effect. 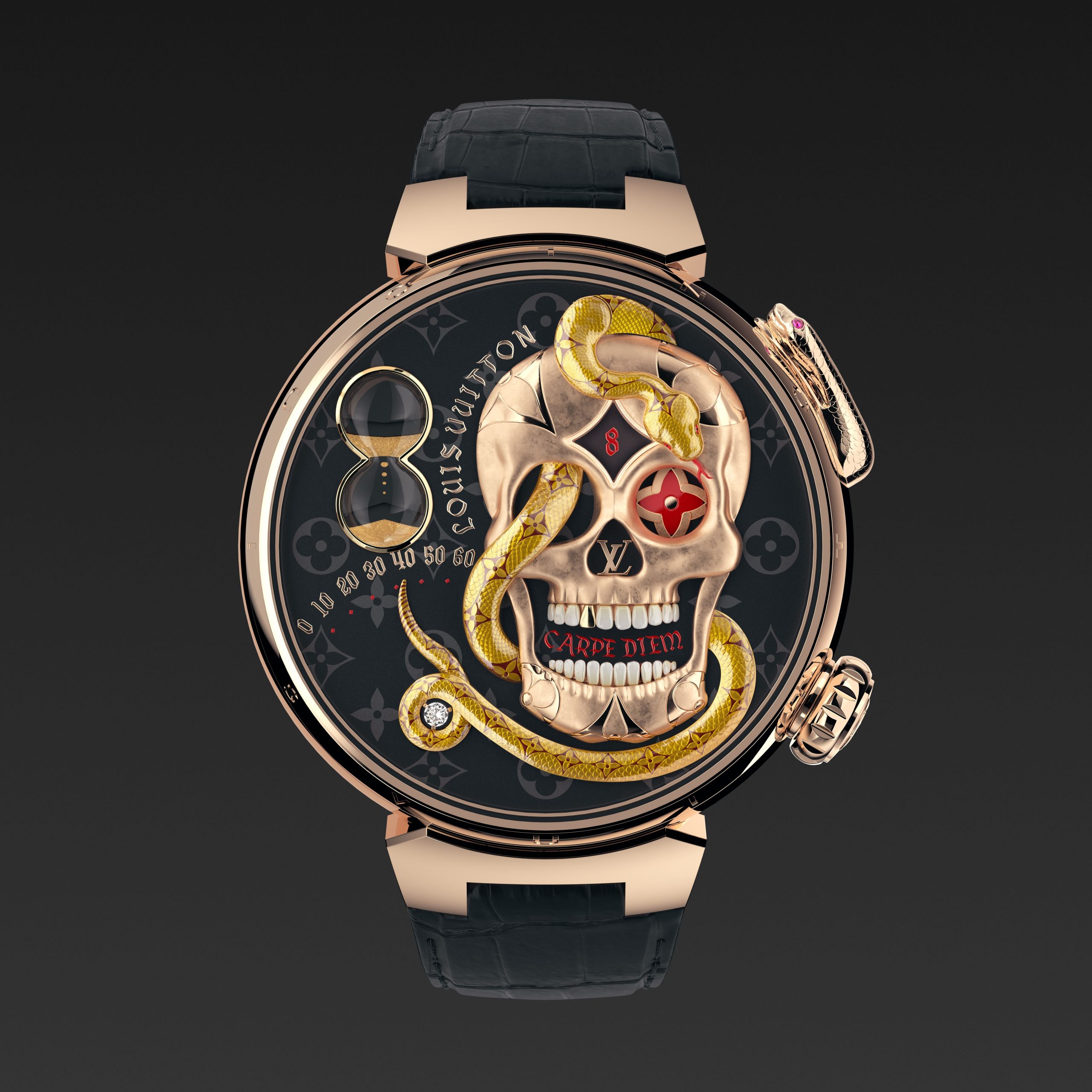 Sculpted from gold with incredible precision, the skull, reptile and hourglass are enhanced by the timeless modernity of Louis Vuitton emblems. Like the Monogram flowers engraved on the skull, tattooed on the snake’s scales or appearing in blood red on the skull’s eye socket. The delicacy, transparency and colours of the enamel, which are particularly remarkable and realistic on the teeth of the jacquemart, enhance the relief on the dial, suggesting even when the hour has not struck — the idea of movement, inspiring the protagonists of the Tambour Carpe Diem in a celebration of existence. 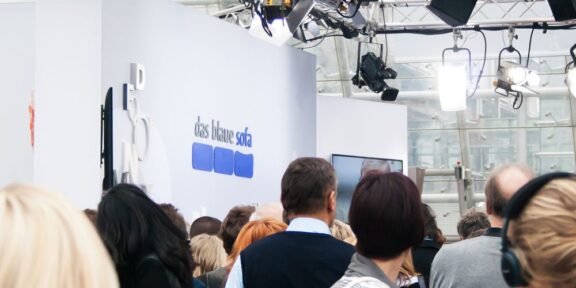 Holding a press conference is a simple, effective way to communicate your message with the media. Holding… 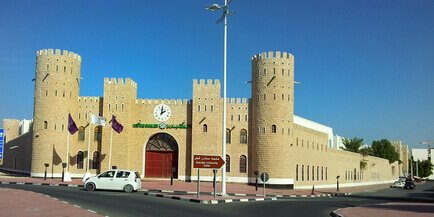 Half Dome in Yosemite

Half Dome is a granite dome at the eastern end of Yosemite Valley in Yosemite National Park, California.… 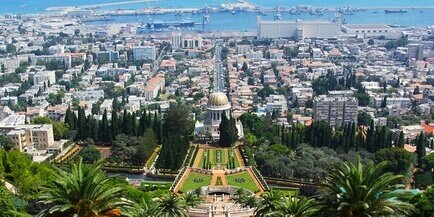 The Middle East is a geographical and cultural region located primarily in western Asia, but also in…

Jewels from the Indian Ocean 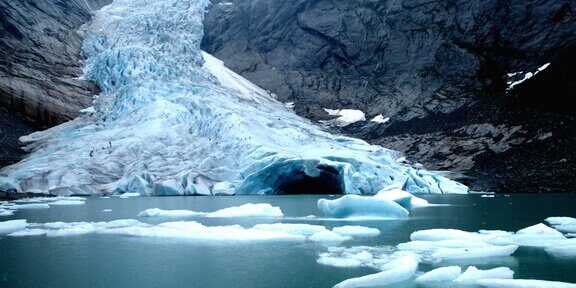 Climate change will mean the end of national parks as we know them. As the National Parks Service turns… 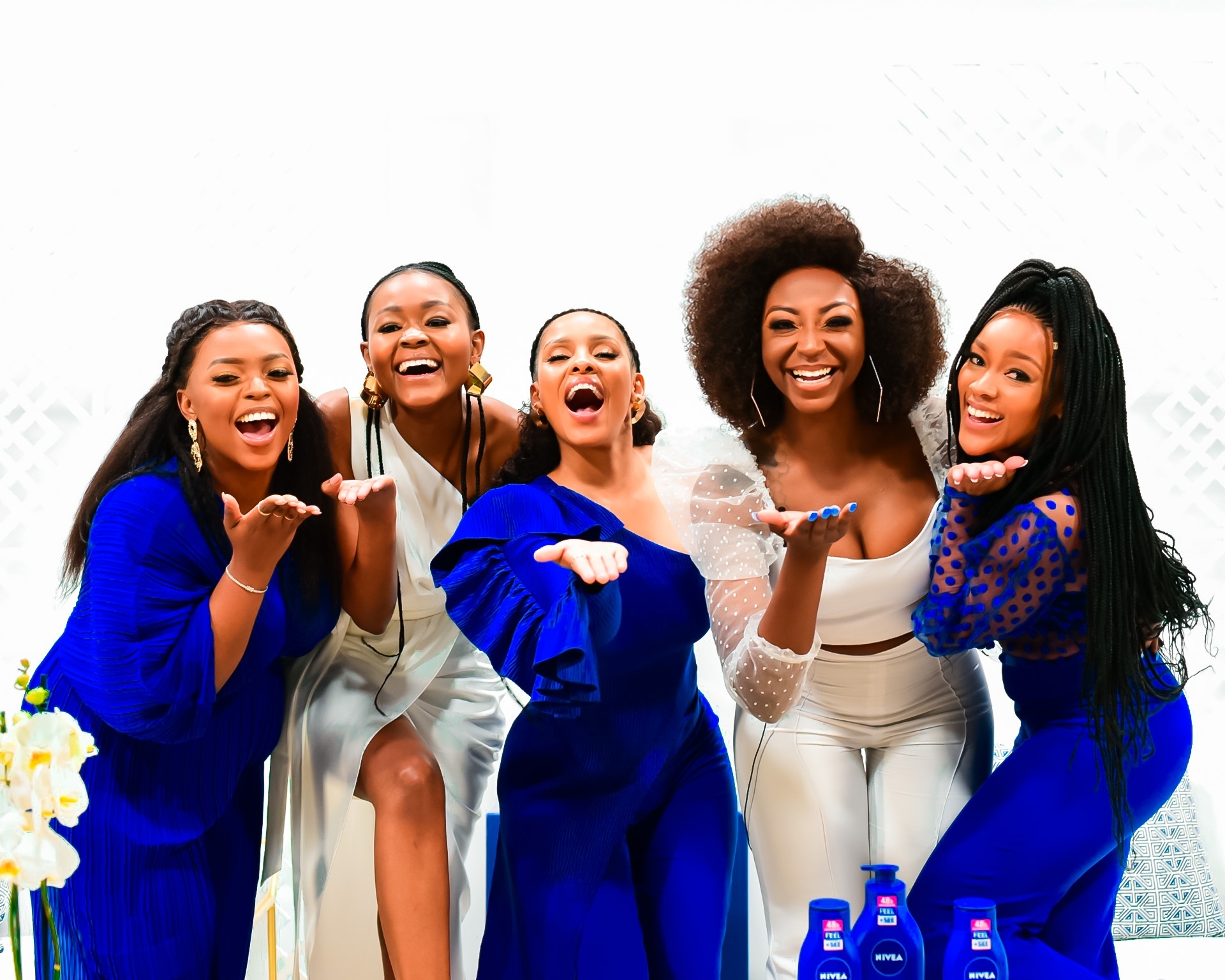 Malawi has declared a state of disaster over worsening food shortages caused by a severe drought.

Malawi has declared a state of disaster over worsening food shortages caused by a severe drought. Malawi…

You can already tell that it’s going… 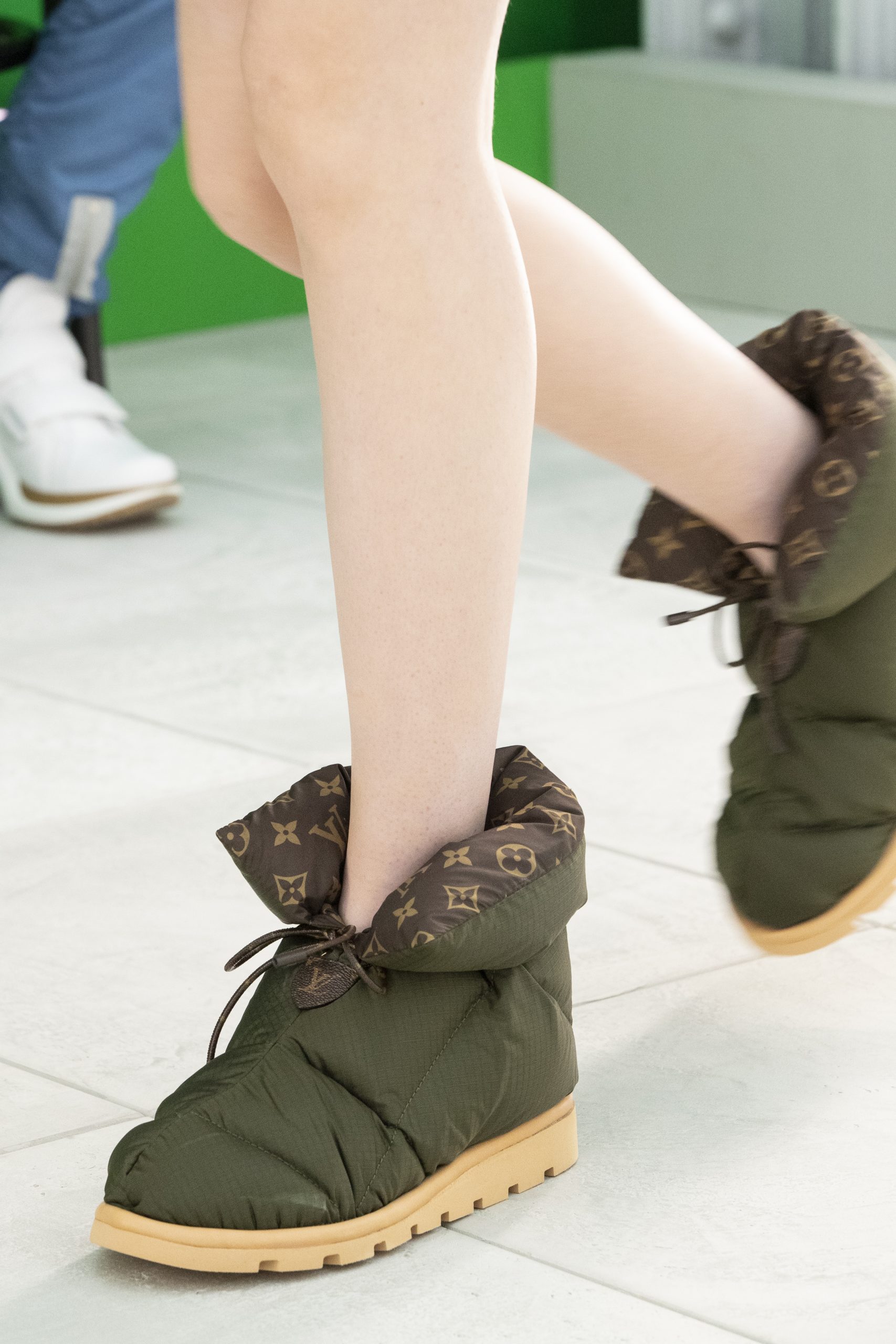 From stylish accessories to stand-out experiences,…

For more than 160 years, creative…